Long-time bachelor Tony Stewart is engaged to be married. The NASCAR Cup Series driver and co-owner of Stewart-Haas Racing posted a picture of fiancee Pennelope Jimenez’s ring-adorned hand on Thanksgiving Day, with the caption: “She said YES!” 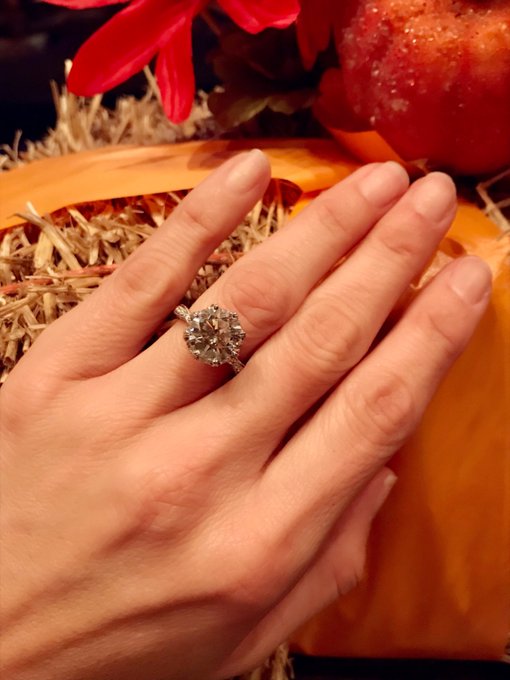 Stewart, 46, and Jiminez have been together since 2016. The bachelor had long joked he would never get married, but he’s clearly met the right woman.

Congratulations to the happy couple.

Martin Truex Junior continued his post-season domination of mile-and-a-half ovals on Sunday at Homestead-Miami Speedway, holding off a late charge from Kyle Busch to win the Ford EcoBoost 400 and claim his first Monster Energy Series championship.  Truex won four of the five playoff races run on intermediate-sized ovals this fall including yesterday’s season finale, in which there was little drama until the closing laps.  All qualifiers in The Championship Four – Truex, Busch, Kevin Harvick and Brad Keselowski – ran consistently in the top five for much of the day and all came away with top-ten finishes.  Down the stretch, Busch drove past Harvick to take second place and then set his sights on Truex, who kept his rival in the rear-view mirror and delivered Furniture Row Racing’s first Cup Series title.  The margin of victory over Busch was sixty-eight one-hundredths of a second.  Kyle Larson led a race-high 145 laps and ran third with Harvick and Chase Elliott completing the top five.  Keselowski came home in seventh place … Pole winner Denny Hamlin failed to lead a lap and placed ninth.  Truex started alongside Hamlin on the front row and quickly put the field behind him at the drop of the green flag – leading four times for seventy-eight laps, matching his car number.

For the fifth time in the last seven weeks, NASCAR has suspended a crew chief for rule violations – in this case, for infractions found during post-race inspection following the Monster Energy Series race last weekend at Martinsville Speedway.  Mike Bugarewicz (bug-a-RAV-ich) of Stewart-Haas Racing drew a one-race suspension and was fined twenty-five thousand dollars after it was discovered that the weight of the simulated T-V video component on Clint Bowyer’s Number-14 Ford did not meet NASCAR specifications.  The team was docked ten owner and driver points, which does not affect Bowyer’s 18th-place position in the point standings.  He finished third in Sunday’s First Data 500.  Seven crew chiefs across all three of NASCAR’s national series have now been suspended since the 2017 playoffs began in September.

A native of Greenfield, Wisconsin, Jim had been a member of Furniture Row Racing since February 2017. He worked for Roush Fenway Racing from 2006-2015 and spent last season with HScott Motorsports. Jim was a longtime race car driver, competing in dirt late models and in asphalt super late models throughout southeast Wisconsin.

He is survived by his wife, Laurie, and daughter Brittany.

Martin Truex Junior continued his mighty march to Miami with his seventh victory of the season Sunday at Kansas Speedway, putting an exclamation mark on the second round of the playoffs with two wins in the last three weeks.  He’s among the eight drivers who advance to the semifinal round that opens next weekend at Martinsville Speedway but the only one with a stat sheet that makes him a near-certainty to qualify for The Championship Four next month at Homestead-Miami Speedway.  With the playoff bonus points Truex has banked this season, he’s already fifty-two above the cutoff that determines the four title contenders who’ll race for a championship – before a single wheel has been turned in the semifinals!  Truex started Sunday’s race from the pole and led twice for ninety-one laps, including the final fifty-seven trips around the mile-and-a-half Kansas City oval.  His margin of victory over runner-up Kyle Busch was two-point-two seconds with Ryan Blaney, Chase Elliott and Denny Hamlin completing the top five … Sunday’s Hollywood Casino 400 was an elimination race with four playoff participants dropped from title contention.  Kyle Larson was sidelined by engine failure and finished thirty-ninth … Matt Kenseth was disqualified for having too many men over the wall working on his car during a pit stop under caution, a rule he said he was unaware of.  Kenseth placed thirty-seventh … Accidents sidelined Ricky Stenhouse Junior and Jamie McMurray – saddling them with finishes of twenty-ninth and thirty-fourth, respectively.

To the family of Robert Yates, a legendary NASCAR engine builder and championship team owner who passed away Monday after his long battle with liver cancer.  Doug Yates announced his father’s passing on Twitter, saying “My dad and hero … has passed and is with the Lord.  Thanks for all the prayers and support.”  Yates was selected for induction into the NASCAR Hall of Fame’s Class of 2018 in May, leading all nominees with ninety-four percent of the votes.  Robert Yates was 74.

Next stop for NASCAR is Chicagoland Speedway for Sunday’s Tales of the Turtles 400, opening race of the 2017 Monster Energy NASCAR Cup Series Playoffs.  The ten-race title series will conclude in November at Homestead-Miami Speedway.  Furniture Row Racing’s Martin Truex Junior is the top seed with four wins during the regular season, a total matched by Kyle Larson – who is seeded Number-2.  Kyle Busch, Brad Keselowski and defending champion Jimmie Johnson hold spots three through five in the sixteen-man field … The next three races comprise the opening round, after which the bottom four drivers will be eliminated from title contention.  Any one of the sixteen qualifiers that wins a race at Chicagoland Speedway, New Hampshire or Dover will automatically advance to the second round that opens October 8th at Charlotte Motor Speedway.