Parking gangs that are using vacuum cleaners to suck money out of machines are forcing some UK officials to consider scrapping cash meters. Armed with sledgehammers, the organized gangs have stolen $160,000 out of 70 machines in the past 12 months. The criminals are smashing the meters open or drilling holes in them before inserting vacuum cleaner hoses to suck the money out.

In the Netherlands, a suspected mugger tried to rob another man, so the man bit off the tip of the mugger’s left ring finger. The print from the fingertip matched prints on file with police. The cops picked up the mugger at his home address, which was listed in that file. Unfortunately, the fingertip was too deteriorated to reattach, but the rest of him was taken to jail. 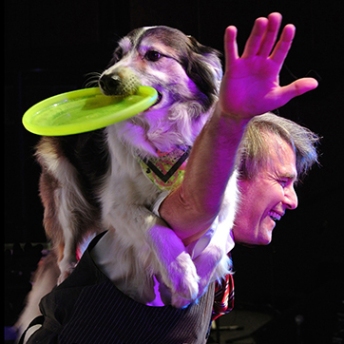 Disorderly duo, Scott and Joan Houghton and their hilarious pack of pooches have created a comedy dog thrill show like no other. And, this hilarious show, “Mutts Gone Nuts,” is coming to the Baileigh Industrial Marquee Season on Sunday, March 10. This special 3:30 p.m. matinee show delivers furry fun for the entire family and is endorsed by Lakeshore Humane Society and Port Cities Animal Hospital.

Expect the unexpected in this top-notch presentation that includes incredible high-flying frisbee dogs, tightwire dogs, dancing dogs, magic dogs, and of course, the one and only… Sammie the Talking Dog!

Audiences and media are raving about this show, that has sold out throughout the country!

“I laughed until I wept.” – Former First Lady, Barbara Bush

Since 1985, comedy duo Scott and Joan Houghton have brought their unique blend of physical comedy and circus arts to audiences from Las Vegas to Tokyo. They spent three years with country star Lee Greenwood at his theater in Tennessee and seven years as the featured comedy act at Dolly Parton’s Theaters in Branson, Orlando, and Myrtle Beach.

In 2005, the duo turned their attention to a creating a comedy dog act. Their nine amazing canine partners are all adopted from animal shelters and rescues. Mutts Gone Nuts is sure to unleash havoc and hilarity as the Houghtons attempt to match wits with their mischievous mutts in a family-friendly performance that is leaving audiences howling for more!

Mutts Gone Nuts mission and assurances: The show’s dogs were adopted from animal shelters or from rescue groups. The Houghtons use all positive, reward-based training methods, which means they reward and reinforce the behaviors that they want (with treats, toys, and praise) and they ignore the behaviors we don’t want.  They look for what their dogs like to do naturally, and cultivate those talents. In addition, living conditions for their four-legged stars are a priority, with their dogs traveling in large, padded, and climate controlled kennels for their safety when on tour. And, their dogs live indoors and are never kept outside in kennels. All are USDA APHIS (Animal Welfare) registered. And, all are incredibly talented and entertaining! Don’t miss this special matinee performance at the Capitol; it’s sure to be furry family fun for all.

If you’re gonna get arrested in Fort Pierce, Florida, cross your fingers that you’re busted by Officer Doug McNeal.

Or maybe not. McNeal may have changed his behavior a bit since July 14 of last year, when — as TCPalm.com reports — he arrested two shoplifters at Walmart and then placed them in the back of his patrol car. So far, so good.

However, McNeal only handcuffed 24-year-old Krista Leigh. He neglected to handcuff her accomplice and boyfriend, 23-year-old Zachery Moellendick. That made it loads easier for the couple to kiss and do some serious back-seat making out during the trip. All of which Officer McNeal was aware of, because he played Barry White’s “Can’t Get Enough of Your Love, Babe” to serenade them while they did it.

Did we mention it was all caught on the patrol car’s internal video?

Once they arrived at the police station, Moellendick asked if he could smoke, which McNeal allowed, in violation of regulations. We should also mention that Moellendick had a lighter tucked in his pants and a cigarette behind his ear, neither of which McNeal had bothered to confiscate when he apparently also didn’t bother to search either Moellendick or his squeeze.

Then once they finished their smoke, Moellendick and Leigh commenced to making out some more, including some unspecified sexual activity.

Following an internal affairs investigation, the report on which was just released, McNeal was suspended for 20 days without pay for multiple violations of departmental policy.

A truck driver in Turkey had a problem. He needed to make a delivery of diesel gas, but the fuel was frozen solid in his truck. So the driver started a small fire under the truck to melt the diesel. It melted the diesel, and the tires, and the interior, and everything else.

As part of America Saves Week, February 25th- March 2nd, 2019, the Office of the State Treasurer is proclaiming Wisconsin Saves Week. The purpose of this campaign is to start a conversation around ways we can support personal savings practices and foster a culture of saving in Wisconsin. In this national campaign, Wisconsin has been lagging behind and we are changing it.

Fifty-one percent of Wisconsinites don’t have enough money saved to cover expenses if they are laid off or experience an illness. Additionally, the average working-age household has only $3,000 saved for retirement. When asked, 88% of Wisconsinites wished they saved more.

“I understand personal finance is a challenge for many reasons, and our hope with this campaign is to raise awareness. Saving even $5 a month can make difference,” stated Treasurer Godlewski.

“I’m proud to partner with Wisconsin Saves, Wisconsin Women’s Business Initiative (WWBIC), banks, credit unions, chambers of commerce, and other organizations around the state to promote this important message of saving. This message is critical to fostering economic security. I’ve proclaimed Wisconsin Saves Week to shine a light on this issue,” said Treasurer Godlewski.

To learn more about the tools and resources available, we encourage people to visit Wisconsin-Saves.org and AmericaSaves.org.

Samsung just unveiled their new Galaxy phones. One of them is foldable and costs almost $2,000. The Galaxy Fold will be in stores in late April. The company says the new Fold “gives you the portability/functionality of a cell phone with the multimedia experience that you can get from a tablet.” In tablet form, The Fold features a 7.3 inch display.

A Florida woman said she woke up to find an alleged burglar in her home. As soon as she saw him she called police, then waited patiently. The burglar was asleep on her couch, he was covered up with a blanket, and had an open beer on her coffee table.

Garbage collection is one of the deadliest jobs you can have. Thanks mostly to impatient drivers who whip around stopped collection trucks and run into trash collectors, garbage collecting is riskier than piloting airplanes and almost three times as dangerous as driving a cab. Researchers said the only riskier jobs are fishing, with 178 deaths per 100,000, and timber cutting, with 156 per 10,000. The rate of deaths for garbage collectors is 90 per 100,000.