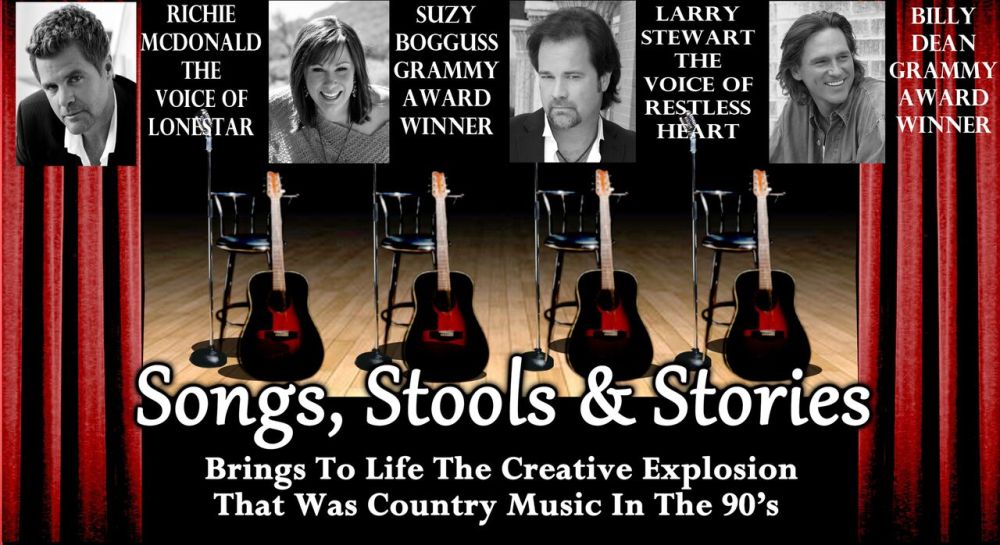 We’re giving away a pair of tickets to Songs, Stools & Stories at the Weidner Center on April 4th.  Click here to enter for your chance to win…enter by midnight March 31st!

Here’s a little about the concert:

The Weidner Center for the Performing Arts is proud to present an event that brings to life the creative explosion that was country music in the 90’s! The Voice of LONESTAR – Richie McDonald; Grammy Award winner Suzy Bogguss; the Voice of RESTLESS HEART – Larry Stewart and Grammy Award winner Billy Dean come together on the same stage for one unforgettable night of “Songs, Stools & Stories.” On Monday, April 4 at 7:30pm you’ll get an intimate glimpse into the lives of the hit makers and their songs. Tickets may be purchased online at WeidnerCenter.com, by phone at 800-895-0071, or in person at Ticket Star locations.

Richie McDonald has long been one of music’s most accomplished and wide-ranging talents. Recognized as one of country’s best singers and a polished and engaging entertainer, McDonald is the face and voice of LONESTAR, ranked among the genre’s preeminent groups.  As one of the industry’s most successful songwriters, he has penned some of the era’s most memorable songs and earned a mantle full of awards and nominations.

Suzy Bogguss joined the church choir at age 5, she then added piano, drums and guitar to her repertoire. Soon she was singing in musicals…it never occurred to her that her future was on stage. But the long list of industry awards including her Grammy – prove that on stage is exactly where Suzy belongs!

Larry Stewart, an American country music icon is best known for his role as lead singer of the country group RESTLESS HEART. The voice you have heard on a slew of top 10’s and number one hits has also garnered Grammy, CMA and ACM awards and nominations.

Billy Dean’s insightful songwriting, clear and distinctive voice and masterful instrumental gifts have not only earned him ACM awards, CMA awards and a Grammy, but also countless devoted fans. His appeal reaches beyond the music world. He has appeared on numerous TV shows as well as made-for TV movies. Billy transcends genres and generations alike – he is loved by the entire family!

Combined, these artists represent over 60 top 10 songs and over 25 Number One Hits. They take the stage together and perform their hits, intermixed with stories about the songs and their careers.